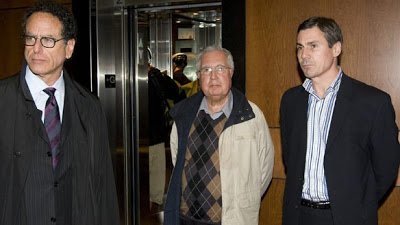 Bishop Raymond Lahey, on the lam for several days after Canadian border guards found child pornography on his laptop, yesterday surrendered to authorities.

Lahey was released on $9,000 bail after turning himself in to Ottawa police on Thursday afternoon to face charges of possessing and importing child pornography. The Roman Catholic cleric, who resigned his post in Nova Scotia on the weekend before news of the charges broke, has been ordered to stay away from parks and from children. He is not allowed to use the internet, and while he is free he is to stay in Rogersville, N.B. The town is the site of a Trappist monastery. His next court date is Nov. 4 in Ottawa. A Canada-wide arrest warrant had been issued for Lahey, 69, who brokered a $15-million settlement for victims of sexual abuse by priests of the diocese of Antigonish in Nova Scotia. Lahey was returning to Canada on Sept. 15 when he was detained at Ottawa International Airport. Canada Border Services agents checked his laptop and found images “of concern,” Ottawa police said in a release. Lahey was allowed to leave, but his computer and other media devices were seized. Police alleged a forensic examination ultimately found child pornography. On Friday, Ottawa police charged Lahey with possession of child pornography and importation of child pornography. The next day, he resigned as bishop of the diocese of Antigonish, citing the need for “personal renewal.”

Lahey had frequently sermonized against child molestation and homosexuality. As my grandmother always said, “The guilty dog barks loudest.”