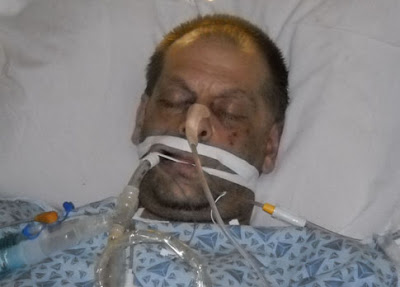 An openly gay Queens man is in a medically-induced coma after being viciously beaten on Sunday by two men shouting anti-gay slurs.

An openly gay Queens man was clinging to life Sunday night after being brutally beaten by two hate-spewing attackers on a walk to a corner store, police and relatives said Sunday.

Jack Price, 49, of College Point, who was set upon early Friday as he went for a pack of cigarettes, was breathing through tubes Sunday in the intensive care unit at Booth Memorial Hospital. “Look what they did to him because he is gay,” Price’s sister-in-law said, standing in his hospital room. “It is in God’s hands right now. There is nothing more they can do for him.” The 5-foot-6, 130-pound man has been near death since Friday at 3 a.m. when two men jumped him outside a 24-hour corner deli on College Point Blvd. Police said Daniel Aleman (RIGHT), 26, and another thug beat Price as he left the store after buying a pack of cigarettes. Aleman, of College Point, was arrested yesterday afternoon charged with assault, aggravated assault as a hate crime, and aggravated harassment. His accomplice was still on the loose last night, police said. Price never hid his sexual orientation from neighbors. His relatives think the two hoodlums recognized him and then attacked outside the deli. “They were walking in the store calling him a ‘faggot,'” said Price’s sister-in-law, who asked not to be named.

According to relatives, doctors for victim Jack Price say his survival chances are being judged on an “hour-by-hour basis.” Price has two collapsed lungs, multiple broken ribs, spleen and liver damage. The second fugitive attacker was said to have boasted during the attack that his father was a corrections officer and that he was immune to prosecution. That stupid revelation may help the NYPD identify him.

UPDATE: I’m told that the NYPD has posted a 24-hour guard at the door of Jack Price’s hospital room after getting word that friends of the attackers have threatened to prevent his ever testifying, should he survive.

Previous Lt. Col. Fehrenbach: I Lived By DADT Law And I Still Got Fired
Next Andrew Sullivan: HRC Head Joe Solmonese Must Resign