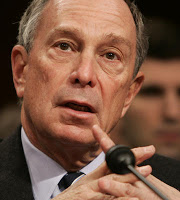 Bloomberg Flip-Flops: I Can’t Get The GOP Votes For Gay Marriage After saying last month that he was confident he could get Republican state senators to change their minds on same-sex marriage, Mayor Bloomberg now tells the Gay City News that he can’t do it.

Less than a month after defending his support for Republican state senators, saying he could get their votes for gay marriage, Mayor Michael R. Bloomberg said conservatives in that body will not support what the mayor termed “our number one priority” at a recent campaign event with gay supporters. “Those will not be the Republican votes that I will get, but they will be there for other things that are important to the city,” Bloomberg said in an hour-long interview with Gay City News and its sister papers, The Villager, Downtown Express, and Chelsea Now. In a September 17 interview with Gay City News, Bloomberg described himself as “the main funder” of the State Senate Republicans, and said he could sway even Brooklyn’s Martin Golden and Frank Padavan from Queens, two conservatives who staunchly oppose gay marriage. During the October 9 interview with the newspapers, Bloomberg said of Padavan, “On this issue, he’s not gettable.”

Bloomberg went on to flip-flop (again) on the possibility of the issue coming to a vote, saying, “Somebody asked me, more than once, whether I think the likelihood of them doing it. I’m skeptical if any of these guys at the national or state level are willing to face controversial issues.”