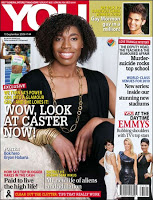 South African Sprinter Caster Semenya Gets Girly Makeover, But Why? As she awaits the results of her “gender testing” at the hands of track and field officials, world champion South African sprinter Caster Semenya has been given a girly-girl makeover for a magazine cover meant to “silence her critics” who claim she’s a man. Via Yahoo Sports:

For the shoot Semenya sported a less ambiguous hair style, a designer black dress, jewelry, makeup and nail polish. Despite what you think about the whole situation, it’s safe to say that this is the first time that Semenya has truly looked like an 18-year old woman. She says she likes the look too. Semenya told the BBC: “I’d like to dress up more often and wear dresses but I never get the chance. I am who I am and I’m proud of myself.” Let’s hope this is what she wants though. Nothing Semenya has done in the past month has suggested that she likes to wear dresses, get manicures and let down her hair. After the controversy broke, she kept her cornrows, wore baggy clothes and pounded her chest in victory like a college football cornerback. When she returned to her hometown, she was dressed the same way. There’s absolutely nothing wrong with that. That seemed to be Semenya’s natural inclination. This feels forced. Hopefully I’m wrong. But if Semenya was pressured to do this to silence her critics, then this is a sad story rather than one of retribution. The opinions of a few jealous coaches shouldn’t have an effect on how an 18-year old carries herself. If Semenya wants to wear dresses then she should. But if she wants to run around in track suits, what’s the problem with that?

Kudos to Yahoo Sports writer Chris Chase for his sensitive observations. I also hope Ms. Semenya isn’t being forced to deny what seems to be her natural butchness, just to satisfy the coaches of her vanquished opponents. On the upside, she looks great either way.

RELATED: One of Semenya’s coaches has resigned “out of shame” because he told her she was being tested for possible doping violations, not that officials suspected she was not female.