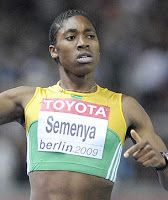 Gender tests of world champion South African sprinter Caster Semenya reveal that she is intersex. According to the results of tests ordered by the International Amateur Athletics Foundation, Semenya has no uterus, no ovaries, and internal male testes producing high levels of testosterone.

The IAAF says, “This is a medical issue and not a doping issue where she was deliberately cheating,” and that there will be no automatic disqualification on these grounds. Semenya will probably be allowed to keep her gold medal, but a second gold may be awarded to the second-place winner from Kenya. No discussions have yet been had over whether Semenya will be allowed to continue to compete in women’s events.

RELATED: The Intersex Society of North America notes that although the term “hermaphrodite” is commonly used to describe intersex people (and this is already happening with Semenya), hermaphrodite literally means “fully male and fully female,” which is a physical impossibility. “Intersex” is the proper way to describe a person who may have one or several of a very broad range of atypical gender characteristics, ranging from ambiguous or mixed external genitalia, internal conditions (as in Semanya’s case), or an atypical chromosonal makeup. Some intersex characteristics are extremely rare, others occur much more frequently, and studies indicate that some aspect of being intersex occurs in about 1 out of 100 people.