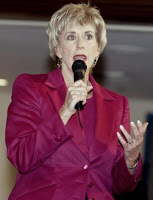 McMahon, who is 60 and lives in Greenwich, is joining an increasingly crowded Republican field hoping to oust the man many perceive as the Senate’s weakest incumbent, Connecticut Democrat Christopher J. Dodd. “I have spent the past 30 years growing what began as a 13-employee small business into a publicly traded, global entertainment company that now provides over 500 jobs here in Connecticut,” McMahon said in a statement Tuesday. “I understand what it takes to balance a budget, create jobs and grow the economy. Washington is out of control, and sadly, Sen. Chris Dodd has lost his way and our trust. I can’t sit by on the sidelines anymore knowing that I have both the experience and the strength to stand up to special interests and bring badly needed change to Washington.”

Blah, blah, blah. And laugh if you will, but remember Jesse Ventura. Linda, who last year gave an address at the Republican convention, has frequently appeared in the ring at WWE events, which is sure to provide ample fodder for her opponents. Here’s a three-second sample.