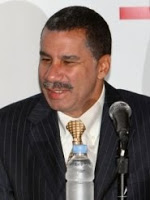 Our newly beardless governor has renewed his pledge to bring marriage equality to a vote in the New York Senate in a special session he plans to call over the state budget.

“I am anticipating a special session and I am anticipating this is one of the issues that we will address,” Paterson told The Advocate Thursday night, shortly after leaving a meeting that included representatives from the Empire State Pride Agenda, the Human Rights Campaign, and Gill Action Fund. State senator Thomas Duane joined the discussion by phone.

The bill’s Senate sponsor, openly gay Sen. Thomas Duane, says the vote could come this month and that he expects it to win.

“We are not going to bring up marriage on Sept. 10,” Duane said. “I am hopeful that we will bring it up when the governor calls us all back into session. He hasn’t set that date; it’ll probably be in late September.” Duane said he hopes supporters of same-sex marriage will be “popping up the advocacy” to encourage senators to vote for the bill, adding that he strongly believes it will pass if lawmakers are allowed to vote their conscience. “I remain optimistic that it’ll pass this year and it’ll pass with bipartisan support,” he said.

But the same problem that dogged the issue earlier this year, the fractious Senate Democrats, remains.

Although the governor supports the legislation, some Senate democrats remain torn on the issue. Sen. Ruben Diaz Sr., a democrat Pentecostal minister, sided with Republicans when the governor called upon democrats for support in June, according to an April article in The New York Times. A lack of republican support will require all 32 Democrats to jump on board.

So. Here we go again.