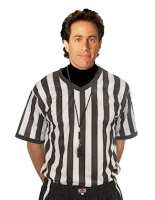 Jerry Seinfeld is producing a new show for NBC called The Marriage Ref, in which couples fight their years-honed battles for the camera and a referee. And not just straight couples, as per Gayopolis, who got this message:

I contacted you because we are searching the country for gay married couples. This could be an excellent opportunity to show on primetime television that marriage is marriage – a show about married life simply would not be complete without showcasing married couples in all forms. I am a casting associate producer for a new show on NBC called “The Marriage Ref.” The show is produced by Jerry Seinfeld and will focus on couples that bicker naturally about every day issues – we will then bring in a marriage referee to settle arguments.

If you want to air you and your hubby’s dirty laundry on national TV, here’s what they’re looking for:

“The Marriage Ref” casting team is searching the country for outgoing and opinionated married couples, willing to appear on national television, who have a long standing argument or issue that must be resolved. No problem is too small!

Whether you argue about parenting, pets, fashion, money, in-laws, weight, housework, chores, communication, neatness, jealousy, past history, friends, sex… Whatever you argue about, we want to hear from you. Tell us why you absolutely NEED a MARRIAGE REF to weigh in and decide who is RIGHT and who is WRONG.

Will watching married gays bicker on national television help the movement? I can see two sides of this.