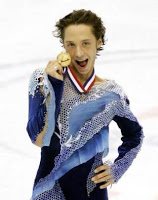 “I don’t think turning figure skating into some kind of X-Games event will promote figure skating to the male population of especially North America, but also the world. This kind of talk has been going around for some time, about making the men more masculine and the women more feminine. But it’s not figure skating if you don’t have the freedom to express yourself and make something beautiful. That’s my goal every time I get new music and get new costumes: to tell a story and to put on a show.

“To butch up figure skating is a ridiculous idea, because there’s no putting me in some two-piece pants suit to skate in. [Laughs.] I love my glitter, I love my prettiness, I love getting my hair done before the events, I love putting on makeup because I’m going to be on TV. I know Elvis Stojko was a big proponent for butching up men’s skating, but I have a hard time taking suggestions from a man who rocked purple pajamas in the Olympic Games and World championships. In my opinion, anyone who wants to change the actual people who are doing the figure skating can suck it.” – Openly gay figure skating champion Johnny Weir, talking to Outsports.com. Weir hopes to compete at the 2010 Olympic Winter Games in Vancouver.