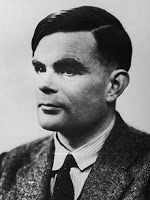 British Prime Minister Gordon Brown has issued a posthumous apology to Alan Turing, the brilliant World War II code-breaker and computer scientist who killed himself after being convicted of the “crime” of homosexuality. Turing’s decoding of the Nazi’s “enigma machine” is credited as one of single-most crucial factors in ending the war.

I am both pleased and proud that, thanks to a coalition of computer scientists, historians and LGBT (lesbian, gay, bisexual and transgender) activists, we have this year a chance to mark and celebrate another contribution to Britain’s fight against the darkness of dictatorship: that of code-breaker Alan Turing. Turing was a quite brilliant mathematician, most famous for his work on breaking the German Enigma codes. It is no exaggeration to say that, without his outstanding contribution, the history of the Second World War could have been very different. He truly was one of those individuals we can point to whose unique contribution helped to turn the tide of war. The debt of gratitude he is owed makes it all the more horrifying, therefore, that he was treated so inhumanely.

In 1952, he was convicted of “gross indecency” – in effect, tried for being gay. His sentence – and he was faced with the miserable choice of this or prison – was chemical castration by a series of injections of female hormones. He took his own life just two years later. [snip] It is thanks to men and women who were totally committed to fighting fascism, people like Alan Turing, that the horrors of the Holocaust and of total war are part of Europe’s history and not Europe’s present. So on behalf of the British government, and all those who live freely thanks to Alan’s work, I am very proud to say: we’re sorry. You deserved so much better.

Turing is considered by some to be the “father of computer science.” More about him here.