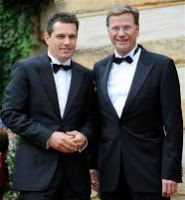 Germany To Get Gay Foreign Minister With the re-election of Angela Merkel as chancellor, it appears that Germany will get its first openly gay foreign minister in Guido Westerwelle. The German press is eating it up.

Guido Westerwelle and his gay partner are Germany’s new “power couple” — at least according to the nation’s leading daily, which splashed a photo of the pair hugging on election night on the front-page above the fold in Tuesday’s paper. The ringing endorsement for the 47-year-old Westerwelle, who is widely expected to be tapped for the high-profile post of foreign minister in Chancellor Angela Merkel’s new government, in the Bild daily also highlighted his personal life in a way he rarely has. “His man makes him so strong,” Bild wrote about Westerwelle, declaring that his 42-year-old partner Michael Mronz was not only his most important adviser during the campaign, but also “gives him security and … supports him when he suffers a setback.” Despite eight years as leader of the pro-business Free Democrats, Westerwelle’s homosexuality has generated relatively little discussion. But with his party set to become kingmaker to Chancellor Merkel’s conservatives and him foreign minister, it has been thrust into the spotlight.

Westerwelle and his partner, an events manager, have been together for six years. Germany’s LGBT activists say that in his role as foreign minister, they will demand that Westerwelle advocate for the rights of gays in other countries.