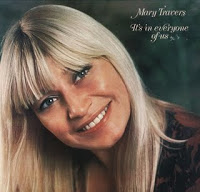 The celebrity death toll of 2009 continues to gain speed. Mary Travers of the famed 1960’s folk trio Peter, Paul & Mary has died at the age of 72.

The band’s publicist, Heather Lylis, says Travers died at Danbury Hospital in Connecticut on Wednesday. She was 72 and had battled leukemia for several years. Travers joined forces with Peter Yarrow and Noel Paul Stookey in the early 1960s. The trio mingled their music with liberal politics, both onstage and off. Their version of “If I Had a Hammer” became an anthem for racial equality. Other hits included “Lemon Tree,” “Leaving on a Jet Plane” and “Puff (The Magic Dragon.)” They were early champions of Bob Dylan and performed his “Blowin’ in the Wind” at the August 1963 March on Washington. And they were vehement in their opposition to the Vietnam War, managing to stay true to their liberal beliefs while creating music that resonated in the American mainstream. The group collected five Grammy Awards for their three-part harmony on enduring songs like “Leaving on a Jet Plane,” “Puff (The Magic Dragon)” and “Blowin’ in the Wind.” At one point in 1963, three of their albums were in the top six Billboard best-selling LPs as they became the biggest stars of the folk revival movement.

The band always denied that their most famous song, Puff The Magic Dragon, was about marijuana, as popular legend had it. All I know is it used to make me tear up when I was little. Still does. My green scales are falling like rain tonight.