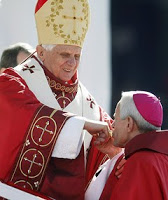 The Archdiocese of Washington today submitted a letter to the District of Columbia Board of Elections and Ethics in support of the “Marriage Initiative of 2009.” The initiative, filed by the Stand4MarriageDC.com Coalition, would define marriage in the District of Columbia, for the purposes of civil law, as the union between one man and one woman. Also today, Washington Archbishop Donald W. Wuerl sent a letter to 300 local priests regarding the significance of marriage and attempts being made to redefine marriage. “A ballot initiative will give voters in the District of Columbia a voice on this critical issue. Earlier this year, the City Council pushed through legal recognition of same-sex marriages from other states without even giving their constituents an opportunity to have input,” said Ronald Jackson, executive director of the DC Catholic Conference. “It is ironic that at the same time the city is asking for voting representation in the U.S. Congress, its leaders are denying residents the opportunity to participate in the democratic process for an issue with widespread implications for children and families,” he added.

And once again, a bunch of elderly sexless drag queens in embroidered dresses and gaudy jewelery want to tell the world how to fuck.