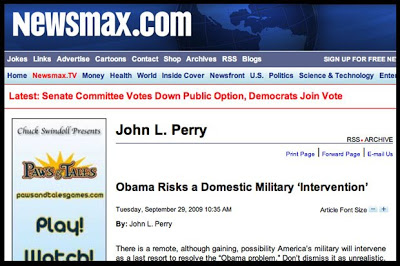 Yesterday right-wing news outlet Newsmax published an opinion piece calling for the military to overthrow Barack Obama. After an immediate outcry from the blogosphere, including some conservatives, today the publication pulled the piece, but Media Matters has it archived.

There is a remote, although gaining, possibility America’s military will intervene as a last resort to resolve the “Obama problem.” Don’t dismiss it as unrealistic. America isn’t the Third World. If a military coup does occur here it will be civilized. That it has never happened doesn’t mean it wont. Describing what may be afoot is not to advocate it. Will the day come when patriotic general and flag officers sit down with the president, or with those who control him, and work out the national equivalent of a “family intervention,” with some form of limited, shared responsibility?

Imagine a bloodless coup to restore and defend the Constitution through an interim administration that would do the serious business of governing and defending the nation. Skilled, military-trained, nation-builders would replace accountability-challenged, radical-left commissars. Having bonded with his twin teleprompters, the president would be detailed for ceremonial speech-making. Military intervention is what Obama’s exponentially accelerating agenda for “fundamental change” toward a Marxist state is inviting upon America. A coup is not an ideal option, but Obama’s radical ideal is not acceptable or reversible.

Newsmax today blamed the essay on an “unpaid blogger,” saying, “Newsmax strongly believes in the principles of Constitutional government and would never advocate or insinuate any suggestion of an activity that would undermine our democracy or democratic institutions.” From what I remember of my visits to Newsmax, this “unpaid blogger” John L. Perry is often at the top of the site, so this “whoopsie” excuse doesn’t hold water. And they call Obama a fascist?

Previous Cheering For The Lord
Next 80’s Flashback