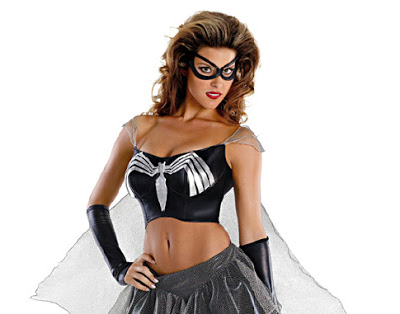 Before she was a modest, chaste, virtue-spouting, God-speaks-through-me hero of Christian-only opposite marriage, Carrie Prejean modeled trampy low-cut Halloween costumes. Which, of course, are now on sale.

Photos of former Miss California USA, Carrie Prejean, posing in skimpy Halloween costumes have surfaced on a Web site, according to TMZ.com. The photos on Disguise.com, which show the notoriously conservative and self-proclaimed Christian wearing knee-high shiny boots, a black mini skirt and belly-baring low-cut top in one ensemble, were taken last year when Prejean modeled for the Women of Marvel costume line, according to TMZ. Prejean also apparently wore the sultry get-ups during a live runway show at Comic Con 2008, a video posted on TMZ.com revealed.

Lady Bigotry! Beaming lasers from the nipples of her fake tits, mowing down justice and equality anywhere she finds it!