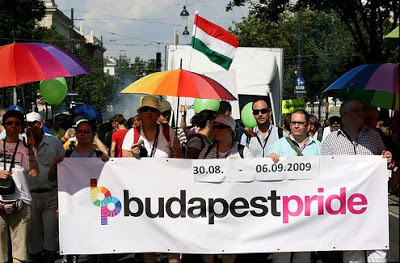 Last year Budapest Pride was marred by violence and arrests as neo-Nazis pelted marchers with stones and eggs and threw fire bombs at police. Yesterday’s parade went off much better, as riot police were fully prepared and did not allow the hundreds of anti-gay protesters anywhere near the parade route.

Rowdy protestors did their best to interrupt a gay pride parade through central Budapest on Saturday, but were prevented by a massive coordinated operation by riot police. However, there were sporadic outbreaks of unrest around the event, with some of the several hundred demonstrators pelting police with stones and burning the rainbow-flag used by the parade organizers. Riot police were able to quickly disperse the several hundred demonstrators through sheer force of numbers and the occasional volley of tear gas. During one fracas, an English man was punched after getting into a row with a group of some 20 anti-gay protestors, police told the local news agency MTI. Riot police broke up the altercation, and the man was taken away for medical attention. A sixty-year-old man among the anti-gay demonstrators was knocked down as the crowd was pushed back by riot police, and had to be taken by stretcher to an ambulance. About 2,000 participants, an international mix of activists and sympathizers, including former prime minister Ferenc Gyurcsany and his wife, gathered in the early afternoon on Budapest’s landmark Heroes Square’ before marching along a broad avenue into central Budapest.

Several days ago, staffers from 14 foreign embassies (including the United States and Canada) were hosted by the British for an afternoon tea party in support of Budapest Pride. All had signed onto a letter encouraging the Hungarian government to properly protect the marchers.