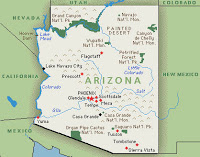 On Friday, Arizona’s governor signed a bill revoking health benefits from the unmarried partners of state employees under the guise of “cost cutting.” Lambda Legal fumes:

State legislators for months had taken aim at the equal benefits plan approved last year by former Governor Janet Napolitano, now Department of Homeland Security Secretary. On Friday, current Arizona Governor Jan Brewer signed a budget bill with the provision revoking the health insurance coverage for domestic partners. The elimination of vital benefits for a small, politically vulnerable group of public workers emerged from a protracted and bruising battle over the state budget. The new law strips gay and lesbian state employees of the ability to obtain health benefits for an unmarried life partner. Because health coverage for an employee’s committed life partner can be a critical lifeline for family stability and financial security, this budget denies ‘equal pay for equal work’ and inflicts severe hardship upon a targeted group of Arizona families. “This is a cruel and cynical ploy by the far right to target and hurt the families of gay and lesbian state employees under the guise of cost-cutting,” said Tara Borelli, staff attorney for Lambda Legal. “With families already facing pressure from job losses and a contracting economy, this couldn’t happen at a worse time. The cutting of benefits pulls the rug out from underneath hardworking state employees and saves the state next to nothing.”

To get at the dirty homos, Arizona also shafted the state’s unmarried-but-partnered straight employees. But at least they can remedy this by getting married.