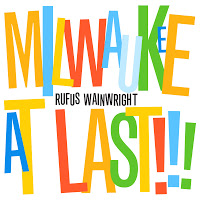 Recorded at Milwaukee’s Pabst Theater in August 2007 this 10 song CD highlights selections from the full concert DVD that will be released simultaneously. Having wowed and dazzled audiences on his acclaimed and celebrated 2007 `Release The Stars’ tour, Rufus Wainwright releases his eagerly anticipated new live CD `Milwaukee at Last!!!’. Rufus Wainwright’s `Release The Stars’ world tour lasted nearly eight months. Launching in London’s Old Vic for a week of triumphant sold out shows in May 2007; the tour was taken around the world before being officially brought to a close in 2008 at Radio City Music Hall, New York City on Valentines Day. `Release The Stars’ is the focal point of the new live CD with other highlights coming from Rufus’ `Want One’ record, a scintillating performance of Noel Coward’s `If Love Were All’ from his `Rufus Does Judy’ show, plus a spine tingling acapella version of celtic song `Macushla’. Rufus Wainwright was fully complemented on his `Release The Stars’ tour by his epic 7-piece band.

A deluxe package featuring a DVD of the concert will be released at the same time as the CD. Enter to win one of our five copies of Milwaukee At Last! by commenting on this post. Only enter once and please remember to leave your email address in the text of your comments. Entries close on Wednesday at midnight, west coast time. Publicists: if you’d like to take part in Swag Tuesday on JMG, please email me.