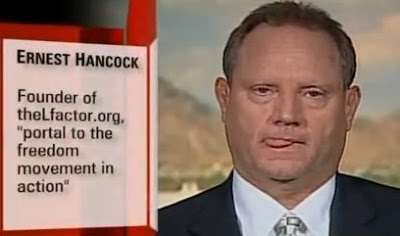 It turns out that the man with the assault rifle who appeared outside of the president’s town hall event in Arizona yesterday was planted by a teabagger Libertarian wingnut internet radio host. Shocker!

The host, Ernest Hancock, says, “We’re up against a tyrannical government that will rob the next generation as long as they can get away with it. If you go to FreedomsPhoenix.com, the top story is the interview I had with this young man. Quite simply, he understands that his generation is going to be plundered until there’s nothing left to plunder. When you do that, at some point, there will be resistance.”

Hancock is a Ron Paul supporter (again, SHOCKING) and has been an apparently perennial candidate for Arizona Secretary of State. Check out his website for a month’s worth of crazy.