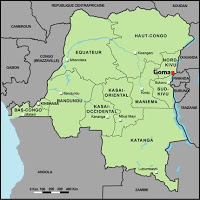 The New York Times reports that armed militias are raping male villagers in the Congo in order to force them into submitting to their control.

According to Oxfam, Human Rights Watch, United Nations officials and several Congolese aid organizations, the number of men who have been raped has risen sharply in recent months, a consequence of joint Congo-Rwanda military operations against rebels that have uncapped an appalling level of violence against civilians. Aid workers struggle to explain the sudden spike in male rape cases. The best answer, they say, is that the sexual violence against men is yet another way for armed groups to humiliate and demoralize Congolese communities into submission. The United Nations already considers eastern Congo the rape capital of the world, and Secretary of State Hillary Rodham Clinton is expected to hear from survivors on her visit to the country next week. Hundreds of thousands of women have been sexually assaulted by the various warring militias haunting these hills, and right now this area is going through one of its bloodiest periods in years.

Many of the victims refuse to come forward or seek medical attention as those that do become outcasts to their communities, referred to derisively as “bush wives.”

The Freepers react in their usual sympathetic fashion.
– “Sodomites don’t care if a man is gay or not… they want to fulfill their lust, like an animal … that’s what Sodomites do and it’s very, very close to beastality… we have adjusted and adapted and put up with this filth to the point that we are in the dung hill with them.”
– “More AIDS checks from Hussein are on the way!”
– “I’m betting Elton John is booking a week’s stay as we speak!”
– “Now that you mention it, I saw Barney Frank was signed up for a trip to the Congo with Anderson Cooper.”