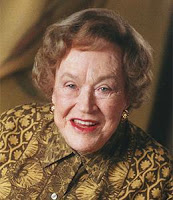 Tomorrow the movie Julie & Julia opens, starring Meryl Streep as famed chef Julia Child. The premise of the flick seems cute enough, but I thought I’d remind folks about the real Julia Child, whose casual homophobia was so famous, she was sued in 1992 for blocking a gay chef from an executive position with the American Institute for Wine and Food. From a 2007 Boston Magazine article:

Homophobia was a socially acceptable form of bigotry in midcentury America, and Julia and Paul participated without shame for many years. She often used the term pedal or pedalo—French slang for a homosexual—draping it with condescension, pity, and disapproval. “I had my hair permanented at E. Arden’s, using the same pedalo I had before (I wish all the men in OUR profession in the USA were not pedals!),” she wrote to Simca. Fashion designers were “that little bunch of Pansies,” a cooking school was “a nest of homovipers,” a Boston dinner party was “peopled by 3 fags in an expensive house…. We felt hopelessly square and left when decently possible,” and San Francisco was beautiful but full of pedals—“It appears that SF is their favorite city! I’m tired of them, talented though they are.”

Although the article notes that Child appeared to have softened in her later years and spoke sympathetically at an AIDS fundraiser in 1988, the lawsuit that came a few years later tells us that perhaps she didn’t change that much. Many excuse Child’s attitudes as typical for her day, but one has to wonder how someone could maintain a decades-long homophobic posture in a gay-heavy environment like professional cooking.