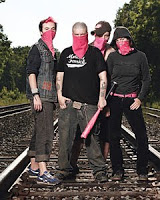 Is Bash Back The New ACT-UP? Details Magazine has published a profile of Bash Back!, the “queer anarchists” who last November provided the right-wing with oceans of anti-gay ink when they invaded a Michigan church during services, shouted slogans, pulled the fire alarm, and threw leaflets at parishioners. In May, the Alliance Defense Fund filed a federal lawsuit against Bash Back. From Details:

The group’s website features images of activists wielding clubs. They seem theatrical given the pranksterlike tenor of the protests, but members insist that their threats to use force are genuine. Real or not, their hard-line stance has struck a chord. Bash Back! has 15 chapters, in cities like Denver, Milwaukee, and West Palm Beach. Such rapid growth troubles the gay establishment. “This looks too much like something I don’t want to be involved with,” says Sue Hyde, a director at the National Lesbian and Gay Task Force. “Seeing weapons in the hands of gay folks in the U.S.? There’s plenty of hate in the world.”

But Bash Back! doesn’t need the support of movement leaders to make headlines. The chapter in Olympia, Washington, glued a Mormon church’s doors shut to protest the Latter Day Saints’ financial support of Proposition 8. To avenge the 2008 shooting death of Duanna Johnson—a transgender woman who, months earlier, had achieved a measure of fame when the vicious beating she’d received in the custody of two Memphis cops was broadcast on YouTube—Bash Back! launched a nationwide campaign. Though the officers were fired, her killer remained on the loose. In Philadelphia, members blocked traffic and wrote STOP TRANS MURDER in pink chalk on streets. In Milwaukee, they dropped a banner at the University of Wisconsin that read R.I.P. DUANNA. The Memphis chapter sent a hearse and coffin to one of the cops’ houses with a note that read SEE YOU SOON . . . —DUANNA BB!

“We’re not trying to change people’s minds, we’re not trying to bend straight people to give us freedom—we’re fighting back,” says Milwaukee member Tristyn Trailer-Trash. “We’re going to stop them from preaching hate, stop them from creating an environment that’s unfriendly to gay, queer, and trans people. We’re not going to be nice about it—they’re not being nice about it!”

In May I had this to say about Bash Back’s Michigan protest: “It was a dumbass, pointless, unfocused action directed at hapless nobodies. Nothing but a black eye for our movement.” My opinion on that incident is unchanged. I’m all for confronting our enemies a la ACT UP, but I’m unconvinced, so far, that Bash Back has helped the movement at all.

Previous Thursday: Free Donna Summer Concert
Next The Watchmen On The Wall(s)