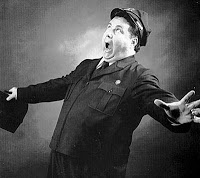 In Which I’m Declared Fashionable According to the New York Times, men with guts are suddenly in fashion. Only they’re no longer “beer bellies” or a “paunch,” they’re called a “Ralph Kramden.”

Too pronounced to be blamed on the slouchy cut of a T-shirt, too modest in size to be termed a proper beer gut, developed too young to come under the heading of a paunch, the Ralph Kramden is everywhere to be seen lately, or at least it is in the vicinity of the Brooklyn Flea in Fort Greene, the McCarren Park Greenmarket and pretty much any place one is apt to encounter fans of Grizzly Bear. What the trucker cap and wallet chain were to hipsters of a moment ago, the Kramden is to what my colleague Mike Albo refers to as the “coolios” of now. Leading with a belly is a male privilege of long standing, of course, a symbol of prosperity in most cultures and of freedom from anxieties about body image that have plagued women since Eve.

The article says that “hypertrophied He-Men with grapefruit biceps and blister-pack abs” are now a sign of too much time on your hands, an obsession with physical perfection that “got so prissy it stopped being masculine.” So I guess I’m hip and butch. Yeeeah, right. Do kids today have any idea who Ralph Kramden was anyway?