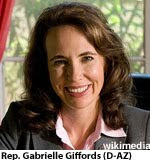 An attendee at Rep. Gabrielle Giffords’ (D-AZ) town hall meeting dropped a potent symbol of how these events have devolved – his handgun.

“Yelling and screaming is counterproductive,” she told the Sierra Vista Herald at a Congress on Your Corner event last week. There, one visitor dropped a gun at the meet n’ greet held in a Douglas Safeway, her staff says. That has aides, who called police to the event, concerned for her safety. “We have never felt the need before to notify law enforcement when we hold these events,” said spokesman C.J. Karamargin. Such activists are showing-up at Democratic events coast to coast, including a recent one held by Northern Arizona congresswoman Ann Kirkpatrick. But the leader of the Tucson movement, Trent Humphries, a former legislative candidate, says Giffords is lying. He says his followers have no intention of hurting her. And they’re not racists, he said. “Nobody is threatening Gabby,” Humphries said. “But she does need to get in front of her constituents and answer to her constituents.”

Will metal detectors become necessary for meetings about health care?