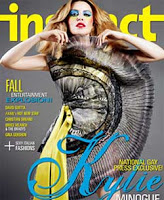 “When I started out in music, going from acting to singing, that transition was very successful, but I also got flack for it. Many hurtful things were said. It wasn’t easy. I was only 19 and I think the gay audience kinda picked up on that and decided to defend me and adopt me. They saw I was being criticised for being myself. A lot of record companies market directly towards ‘the pink pound’. But I never did that. They kind of adopted me instead. Somebody once said to me, ‘Gay icons, there’s a lot of tragedy in their lives. But you don’t really have that.’ I said, ‘I’ve had a lot of tragic hairdos and outfits. I think that makes up for it.'” – Kylie Minogue, speaking to Instinct Magazine. Minogue’s first-ever North American tour begins next month.