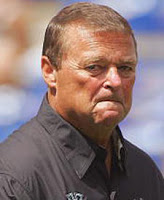 University of Hawaii football coach Greg McMackin has given a month’s suspension without pay and a 7% salary cut as punishment for using the word “faggot” several times during a press conference.

Greg McMackin, who attempted to apologize multiple times during the same press conference — he said he hoped the press wouldn’t report on what he said because he didn’t “want to… have every homosexual ticked off at [him]” — will also receive a 7-percent pay cut. McMackin volunteered to work without pay during his suspension. The 30 days without pay and the 7-percent pay cut will save the University of Hawaii nearly $150,000 dollars for the year. Some of that money will pay for a student intern for the university’s gay student union office. McMackin offered up yet another apology for the incident at a press conference, saying, “I just want to say that I made a big mistake. I want to apologize to anyone and everyone that I offended.”

The coach has also agree to appear in a PSA for LGBT rights.