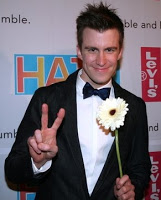 – Openly gay Tony nominee Gavin Creel has been sidelined from his starring role in Hair due to an onstage ankle injury.

– Spike Lee’s documentary of the Tony winning Passing Strange debuts tonight at NYC’s IFC Film Center. Next week the film will be available on demand via Sundance Network.

– UGH: Disney is in negotiations to turn the Beatles’ Yellow Submarine into a Broadway musical.

– The national tour of the Dreamgirls revival kicks off at Harlem’s Apollo Theatre on November 11th.

– The cast of Hair and other Broadway “notables” will rally at Central Park’s Delacourt Theater next Friday from 2:30pm-3:30pm to help publicize the National Equality March. Hair’s producers have canceled the October 11th performances so that the entire cast can attend the march.