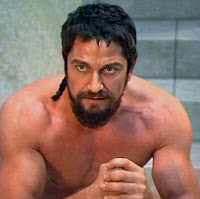 “I talk about my sexuality, but it’s always glossed over. People seem to shy away from the issue. Whenever it is discussed, its distended and exaggerated. Gerard Butler is gay. No I’m not. I don’t know myself what I am so it can be bewildering to see that being plugged. I have been in relationships with women. And men. That doesn’t make me gay. That doesn’t make me straight. Its hard enough to go through these things in my mind without being scrutinised about it so there are times when you want to close the door and say my sexuality is my own personal business.” – 300 star Gerard Butler, in a 2004 Movieline interview just now getting attention.

UPDATE: Movieline is saying that the story is a fake! It looks like this all started on Saturday on the LiveJournal community forum Oh No They Didn’t. And they got it from an April 20th posting on the UK film fan forum Female First, where the very first commenter called out the story as false. Hmm. Thanks anyway to all the JMG readers who bombarded me with the tip this morning.

Previous Photo Of The Day
Next Male Rape Rampant In Congo