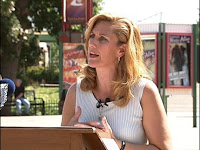 And Then She Floated Home In Her Ark Tulsa, Oklahoma mayoral candidate Anna Falling is running on the platform of forcing the city’s zoo to include the book of Genesis in its displays, in order to explain to children where all the animals came from.

“Some may ask why this issue during a Mayoral campaign? And I say why not?” said candidate Anna Falling. For Anna Falling, the road to city hall runs through the Tulsa Zoo. She’s made her Christianity central to her platform and now the exhibit depicting the Christian story of Creationism is her first campaign promise. “Today we are announcing that God will be glorified in this city. He shall not be shunned. Upon our election, we hereby commit to honoring Him in all ways that He has been dishonored,” said Anna Falling. Falling says God was dishonored four years ago, when the Tulsa Parks Board rejected an exhibit which borrows heavily from the first book of the Bible.

Four years ago Tulsa went through a protracted battle with Creationists over the same issue.