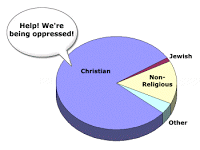 At the World Congress of Families in Amsterdam, Christian activists from the U.S. warned yesterday that homosexuals are planning to squelch religious expression in the name of marriage equality.

The comments came from attorney Ben Bull of the Alliance Defense Fund. He warned it is common for Christians and pastors to suffer at the hands of homosexual activists, simply for abiding by biblical principles. “One of the things that the leaders of the homosexual legal agenda have been saying for years is that whenever religious freedom or the free-speech rights of Christians interferes with their agenda, that their agenda trumps,” he pointed out to conference attendees. “There’s a freight train coming and it’s heading right towards Christians, and it’s called the homosexual legal agenda — and it will run right over our constitutional rights unless we’re heard loud and clear,” he added. Homosexual activists, Bull explained, have used the courts rather than elections to consistently gain ground.

Little things like the fact that no one has ever had their freedom of speech suppressed over marriage equality doesn’t stand in the way of their bigotry.