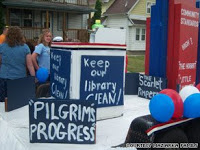 Remember the Christian group that wants to burn a gay-themed book that they found in their Milwaukee-area library? The battle rages on and the Christianists now want the library to stock books by “ex-gays” in order to “balance” any books that positively depict homosexuality.

Residents have sparred for months on blogs, airwaves and at meetings, including one where a man told the city’s library director he should be tarred and feathered. The row even spread to this year’s Fourth of July parade, which included a float featuring a washing machine and a sign that read “keep our library clean.” “If you told me we would be going through a book challenge of this nature, I’d think, ‘Never in a million years,’ ” said Michael Tyree, director of the West Bend Community Memorial Library. The strife began in February when West Bend couple Jim and Ginny Maziarka objected to some of the content in the city library’s young-adult section. They later petitioned the library board to move any sexually explicit books — the definition of which would be debated — from the young-adult section to the adult section and to label them as sexually explicit. Ginny Maziarka, 49, said the books in the section of the library aimed at children aged 12 to 18 included homosexual and heterosexual content she thought was inappropriate for youths. She and her husband also asked the library to obtain books about homosexuality that affirmed heterosexuality, such as titles written by “ex-gays,” Maziarka said. “All the books in the young-adult zone that deal with homosexuality are gay-affirming. That’s not balance,” she said.

More on this idiocy, including videos, can be found over at Towleroad.

Previous Gillibrand: DADT Bill Not Happening
Next No Pride 09 For Belarus