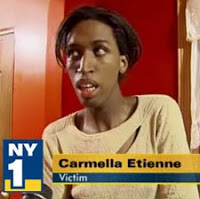 Two NYC men are under arrest and charged with a hate crime after throwing rocks and beer bottles at a transgender woman in Queens.

“I was being attacked because of who I am,” said victim Carmella Etienne, 22. “I’m pretty traumatized.” Nathaniel Mims, 25, and Rasheed Thomas, 22, allegedly screamed anti-gay slurs and threatened to cut the woman’s throat Wednesday night in St. Albans. They face charges of assault as a hate crime, menacing and harassment. “I didn’t know you could get locked up for calling somebody names,” Thomas said after his arrest, according to prosecutors. “I called her a bunch of names. I called her a [expletive deleted], but she didn’t see me throw anything.” Etienne, hit in the leg, told cops she saw the men throwing things at her. “They were yelling homophobic slurs at me. They threatened to kill me. Chunky rocks and empty beer bottles they were throwing at me,” said the aspiring fashion designer. “Don’t ever walk that block anymore or we will slash your throat,” one of the defendants said, according to cops. Etienne is now afraid to leave her home. “The law will hopefully put them to justice. I love being myself,” she said.

Etienne was treated for a deep cut to her leg and has been released from the hospital. The men are being held on $5000 bail and face up to 15 years in prison if convicted. NYC has experienced a rash of assaults against LGBT people over the last few weeks.