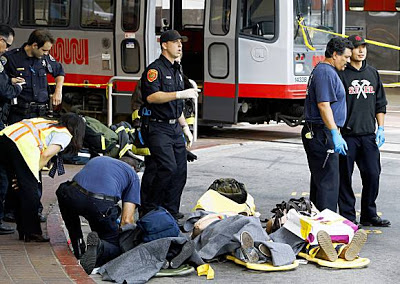 Dozens are injured, some critically, after a crash of San Francisco’s Muni just west of the Castro at the West Portal Station. The station is one stop away from the Castro.

Forty-seven people were injured today, four of them severely, when a Municipal Railway train rear-ended another Muni train at the West Portal Station, authorities said. Witnesses described a chaotic scene following the crash, which Muni spokesman Judson True said occurred just before 3 p.m. when an L-Taraval smashed into the back of a K-Ingleside train near the station’s boarding platform. The impact of the crash shattered the front window of the L train and crumpled its steel nose. The shattered windshield, apparently made of safety glass, stayed in place. Both trains were headed in the outbound direction, but the K train was apparently stopped, authorities said. The most seriously injured was the driver of the L train, who was conscious when paramedics arrived, said Deputy Fire Chief Pat Gardner. Three riders were also severely injured, authorities said.

Early reports blame the crash on operator error, making it the latest such incident in a recent spate of rail disasters around the nation.