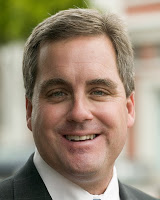 San Francisco City Attorney Dennis Herrera has filed a request to join the Olson/Boies federal suit to overturn Prop 8. Recently the ACLU, Lambda Legal, and the National Center for Lesbian Rights also requested standing in the suit, despite a fierce rebuffing by the Olson/Boies team.

The city would add “a unique local government perspective” to the case, along with its extensive legal experience in defending gay and lesbian rights, if allowed to intervene, City Attorney Dennis Herrera’s office said in court papers. The city and leading gay-rights groups have been allowed to file written arguments supporting the challenge to Prop. 8. But only the plaintiffs -two couples and an organization represented by attorneys Theodore Olson and David Boies, adversaries in the 2000 Bush vs. Gore presidential election case – have the right to direct the case, negotiate with defenders of Prop. 8 and file appeals.

Herrera’s office has promised to “work cooperatively” with the Olson/Boies team if allowed to join the suit.