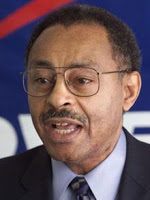 Sen. Burris: Marriage Is For Bloodlines Sen. Roland Burris (D), the man who was appointed by deposed Illinois Gov. Rod Blagojevich to replace Barack Obama in the Senate, has an odd viewpoint on marriage.

“My concept of marriage is a male and a female for the perpetuation of the species, for children to be born and identify the bloodline and the heritage. “But I’m pretty sure, as things are moving along, that that will probably change.” Burris says he supports civil unions. Also at the parade was Attorney General Lisa Madigan, who says she’s considering running for the senate seat. Madigan says she also supports civil unions.

Identify the bloodlines and the heritage? Uh, what? Burris delivered that opinion at Chicago’s gay Pride parade this weekend.