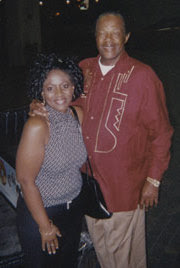 The Saga Of Marion & Donna Washington City Paper has somehow obtained voicemails exchanged by defender of marriage and “moral politician” Marion Barry and not-his-wife Donna Watts-Brighthaupt. Over the weekend Barry was arrested for stalking Donna, although he told police that he “just didn’t realize” that it was her car he was following through a city park. The most amusing of the voicemails reveals that Barry threw Donna out of their Denver hotel room for refusing to give him oral sex.

Why you saying he fuck me like you did?…Why you sayin’ he has my credit fucked up, and. you know. I think you telling your friends, sayin’ I want a man who fucked me up, fucked my credit up, got me to lose my house and she keep goin’ back to that man…You want me to think I’m crazy…All I’m trying to saying is I forgive. You put me out in Denver cause I wouldn’t suck your dick. You put me out in Denver! You made me have to fuck your ass up in the middle of a [unintelligible]. We were like fuckin’ Tina and Ike Turner. And I forgive. Alright you just wastin my damn time?…I can’t believe this….you always… you don’t think about other people’s time. You’re inconsiderate…

Barry is expected to battle DC’s marriage equality legislation this fall, just as he joined the failed attempt to put the issue to a referendum last month.

(Tipped by JMG reader Daddy B)

Previous Daily Ungrumble
Next First, They Came For The Gays….