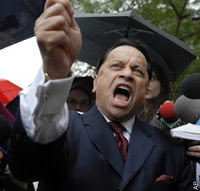 Claiming to have a “handshake deal” to be named NY Senate majority leader, Sen. Pedro Espada told the NY Post today that he is flipping back to the Dem side of the aisle, once again giving the Democrats a 32-30 edge in the deadlocked chamber. How many “majority leaders” does that make for the NY Senate in the last two months? Three? Four? And will the Dems take him back anyway?

Several Democratic senators have repeatedly insisted they would not accept Espada’s return to their Conference because of a series of allegations of improper or illegal activities that his political opponents have leveled against him. Espada has been described as an unpredictable ally by Republicans and Democrats and some of his statements in recent weeks, including his claim that as many as 20 Democrats were set to defect to the GOP, turned out to be false. The impact of Espada’s decision on a new legal challenge brought by Senate Republicans to Paterson’s appointment of Ravitch – which Attorney General Andrew Cuomo says is unconstitutional – could not be immediately determined.

Espada is under investigation for numerous ethical violations, including that he does not actually reside in his Bronx district, where neighbors report never seeing him in the building where he rents an apartment. Espada’s primary residence appears to be in suburban Mamaroneck. The renegade Senator recently made a big show of displaying his clothes closet in the Bronx apartment as proof that he really lived there. Additionally, Espada has been fined over $60K for campaign finance violations and is under investigation for earmarking over $2M in state funds for health care centers that he co-founded. One of the organizations was created one week before Espada requested the funding.

But hey, Espada says he’s for marriage equality, so it’s all good as of today, right?