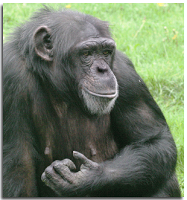 Researchers believe they have found an important missing link in the study of simian AIDS, a discovery with implications for human research. Up until now, scientists had believed that the 40+ known strains of simian immunodeficiency virus (SIV) did not make the animals ill. But two colonies of chimpanzees infected with a particular strain of SIV have been found to have death rates more than 10x higher than groups infected with other strains. From the rather technical article in Nature:

By following 94 members of two habituated chimpanzee communities in Gombe National Park, Tanzania, for over 9 years, we found a 10- to 16-fold higher age-corrected death hazard for SIVcpz-infected (n = 17) compared to uninfected (n = 77) chimpanzees. We also found that SIVcpz-infected females were less likely to give birth and had a higher infant mortality rate than uninfected females. Immunohistochemistry and in situ hybridization of post-mortem spleen and lymph node samples from three infected and two uninfected chimpanzees revealed significant CD4+ T-cell depletion in all infected individuals, with evidence of high viral replication and extensive follicular dendritic cell virus trapping in one of them. One female, who died within 3 years of acquiring SIVcpz, had histopathological findings consistent with end-stage AIDS. These results indicate that SIVcpz, like HIV-1, is associated with progressive CD4+ T-cell loss, lymphatic tissue destruction and premature death. These findings challenge the prevailing view that all natural SIV infections are non-pathogenic and suggest that SIVcpz has a substantial negative impact on the health, reproduction and lifespan of chimpanzees in the wild.

SIVcpz is the immediate precursor of HIV-1, the strain that affects most people in the world (outside of western Africa). Understanding how SIVcpz makes chimpanzees ill may provide important clues for HIV research in humans. SIV is believed to have spread to humans in west-central Africa about 100 years ago via infected monkeys, either by contact with the blood of the animals or by the consumption of infected simian meat. Viral sequencing suggests human infection may have begun as early at 1884. Many decades later the disease was able to spread widely among humans due to the new ease of global travel.