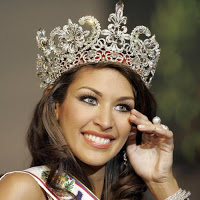 Miss Universe On Gay Marriage: Why Not? Since we’ve been forced to care about the opinions of beauty queens this year, I suppose it’s worth noting that Miss Universe endorsed marriage equality on the Howard Stern show today.

Howard Stern took a cue from Perez Hilton and asked Miss Universe Dayana Mendoza if she would support the legalization of gay marriage. Mendoza danced around the issue a bit at first, stating that Carrie Prejean had the right to think whatever she wanted and “why should I care” what the second-runner up to the Miss USA crown thinks. When pressed further, Dayana Mendoza stated that she had several close gay friends in her life that she would like to see be able to spend the rest of their lives with the people that they loved. Howard Stern cornered her on what has apparently become the most compelling pageant question of our generation: “Should gay marriage be legal?” “Why not?” responded Dayana Mendoza. Dayana Mendoza joked that if her stance on gay marriage conflicted with her Miss Universe title, she only has about a month in her reign anyway. “Bravo!” called out Howard Stern Show openly gay guest announcer George Takei.

Like the Miss California USA pageant, Miss Universe is owned by Donald Trump.