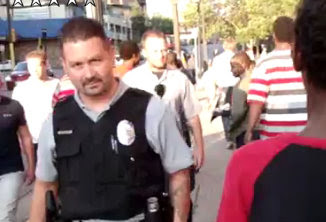 Minneapolis Cops: It Wasn’t One Of Us JMG reader Sean Chapin forwards us this press release from the Minneapolis Police Department, who says that it wasn’t one of their officers ignoring the gay man being verbally harassed by a group of homophobic teens and children outside of Twin Cities Pride.

June 30, 2009 ( MINNEAPOLIS ) Currently, there is a video on YouTube of an incident that occurred sometime during the Minneapolis Gay Pride Festival. There has been some speculation that Minneapolis Police Officers were in that video. The Minneapolis Police Department wants to assure the public that those security officers who casually walk by during this incident were not from our department. We have a strict uniform policy and those were not our uniforms or our police officers. This is unacceptable behavior that would not be tolerated by the Minneapolis Police. Action would have been taken immediately to stop the harassment that is depicted in the video. We want all people, no matter of color, race, creed or sexual orientation to feel safe and welcome while they are in the city of Minneapolis. Link to video. PIO contact for this incident is Sgt Jesse Garcia III.

The Minneapolis PD is to be lauded for their prompt and proper response to this incident. But if it isn’t one of theirs, who is the man in the video? He appears to be carrying a gun, but he could just be a bank security guard.