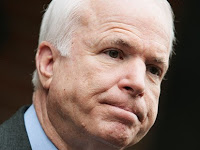 Sen. John McCain spoke on the record today at the floor of the Senate to object to the Matthew Shepard Act being attached to a defense appropriations bill.

“This is a complete abdication of the responsibilities of the judiciary committee but more importantly could hang up this bill for a long period. While we have young Americans fighting and dying in two wars we’re going to take up the hate crimes bill because the majority leader thinks that’s more important — more important than legislation concerning the defense of this nation.

‘It requires citizens hearings, and debate. But what are we going to do? For reasons that I guess the majority leader can make clear because I don’t get it, wants to put it on the national defense authorization bill and pass it that way. Now, [he will] probably succeed and he’s calling it bipartisan. The last time I checked it has 44 Democrat sponsors and two Republicans. That’s the definition around here of ‘bipartisan’ bills. That’s the way the stimulus package was bipartisan. That’s how the omnibus spending bill was bipartisan.

“And I’m confident if the health care reform – “reform” – it will be reasonable in another “bipartisan” fashion. So we’ll have some hours of debate. We’ll have more exacerbated feel ensure between this side of the aisle and that side of the aisle. I would imagine that the hate crimes bill, given the way, the makeup of this body, may even be put on a defense authorization. A huge issue. A huge issue. It will now be placed on a defense authorization bill and passed through the congress and signed by the president. That’s a great disservice to the American people, Mr. President. The American people deserve debate and discussion and hearings and witnesses on this legislation.”

The bill may be voted on tonight or tomorrow.

Previous Quote Of The Day – Johnny Depp
Next Obama To NAACP: Our Gay Brother And Sisters Are Still Denied Their Rights