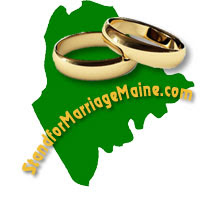 Maine’s anti-gay Stand For Marriage group today turned in 100,000 petition signatures to the secretary of state, almost double the required 55,087 names. The names must be verified, but with a margin like this, the repeal of same-sex marriage will surely be on the November ballot.

Maine Freedom To Marry reports that they have gathered 60,000 pro-marriage equality pledge cards from Mainers, with more to be gathered over the summer.

Maine Freedom to Marry organizers announced at a noon rally Thursday at Portland City Hall that more than 400 volunteers had collected the cards from across the state. The announcement came a day before opponents are scheduled to deliver signatures to Augusta to put the issue of gay marriage on the November ballot. The rally was the latest development in a campaign that is expected to be highly emotional and very expensive. By mid-July, the coalition of opponents of gay marriage, the Stand for Maine Marriage political action committee, had raised more than $343,000, while those fighting the repeal had taken in $138,640 in contributions.

Maine Freedom To Marry has legally changed their name to No On 1/Protect Maine Equality. Previous Anti-Gay Referendum 71 Nut: You Can’t Videotape Me, I’m FAMOUS
Next Most Birthers Are Southern