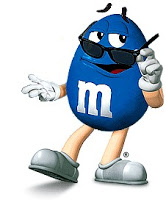 The Magic Of Blue The food dye that gives blue M&M’s their colour can help mend spinal injuries, researchers say. The compound Brilliant Blue G blocks a chemical that kills healthy spinal cord cells around the damaged area – an event that often causes more irreversible damage than the original injury. BBG not only reduced the size of the lesion but also improved the recovery of motor skills, tests on rats showed. Those treated with BBG were later able to walk, although with a limp. Rats that did not receive the BBG solution never regained the ability to walk. On the downside, the treatment causes the skin to temporarily turn bright blue and BBG needs to be injected soon after the trauma. The test injections were given within 15 minutes.

Human trials will not begin until more animal testing has been done, but researchers say they are optimistic that acute spinal cord injuries could be treated with the compound within a few years.