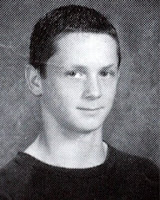 Prosecutors say that Brandon McInerney killed gay teen Lawrence King in part because of the influence of neo-Nazis who had befriended him. A notebook filled with Nazi-related drawings was found in the 15 year-old’s bedroom.

“The evidence strongly indicates he had been indoctrinated to some level,” said Dan Swanson, a Simi Valley police detective and specialist in neo-Nazi gangs. On the second day of McInerney’s preliminary hearing in Ventura County Superior Court, Swanson discounted earlier testimony that McInerney had black and Latino friends at school, contending that white supremacists are accustomed to hiding their true beliefs. A search of McInerney’s bedroom and backpack yielded the notebook, seven of Hitler’s speeches translated into English and a book about SS troopers who had been former members of the Hitler Youth. The collection reflected an interest in the Nazis that was far more profound than the World War II book report McInerney had been assigned, the investigator testified. Swanson said the teenager’s family was friendly with a white supremacist in Oxnard’s Silver Strand area. The man told Swanson that he and his girlfriend allowed McInerney to sleep in their apartment a night or two before the shooting.

McInerney is being tried as an adult for first degree murder. In March his father was found dead in the family home.

RELATED: If you’ve lost track of the details or if this case is new to you, my archive of stories about the murder of Lawrence King is here.