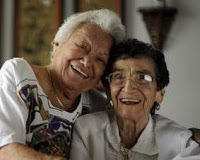 Caroline Leto and Venera Magazzu of Dania Beach, FL, met at a party in 1939. They’re still together.

Yes, couples in their 90s still argue occasionally. This is how it went recently for Caroline Leto and Venera Magazzu as they sipped lemonade on their couch in Dania Beach: “We’re not going to have a party,” said Magazzu, 97, insisting they are too old for such things. “Oh, yes we are,” responded Leto, 96, who noted the two can still polka. “This is a big one.” Indeed. A party celebrating 70 years together is a big deal for any pair. But a celebration of this couple’s love takes on special meaning, considering they had to keep silent about it for decades. “You just couldn’t tell everyone we were lovers,” said Leto. “You tell people we’re friends, and some thought we were sisters.” Leto and Magazzu downplay their pioneering role in the gay and lesbian community. But many of their friends and relatives talk it up anyway, marveling at how their love was able to transcend a lifetime’s worth of obstacles. To mark their Aug. 17 milestone, members of Etz Chaim, a gay and lesbian congregation in Wilton Manors, are planning a party. They hope Leto and Magazzu will attend and show everyone how to do the polka.

The pair became domestic partners in NYC in 1996. In 2001 they cowrote a self-published book titled An Unadulterated Story: Young and Gay at 90.

Previous 80’s Flashback
Next He Shot A Man In Weeno