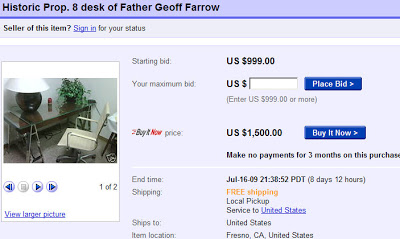 Father Geoff Farrow came out to his Fresno, California congregation in October last year in a sermon decrying Proposition 8. Predictably, his diocese promptly suspended him. But far be it for the Catholic Church to miss ANY opportunity to rake in some dough, even in the case of a “disgraced” priest, as they are now SELLING Father Geoff’s office desk on eBay, billing the item as the “historic Prop. 8 desk of Father Geoff Farrow.”

JMG reader Jeff, who is the administrator of the Facebook group “Supporters Of Father Geoff,” warns: “Please be advised that Father Geoff is NOT involved in this. The desk is being auctioned by the Archbishop of Fresno that suspended him. Apparently they have NO problem in attempting to benefit from the harm they inflicted upon him.”

UPDATE: Father Geoff has confirmed that item for sale is the desk he used at the St. Paul’s Newman Center in Fresno. I’m trying to determine the identity of the eBay user who made the post. His eBay activity appears to date back to 1999, with dozens of “positive feedback” mentions.

The ad on E-bay states that the proceeds will go to an unspecified charity. As far as I know, the desk and chair are the property of Saint Paul’s Newman Center in Fresno and, of course, ultimately of the Diocese of Fresno. If this were still the case then the sale of the desk and chair would have to be authorized by Deacon John Supino, the current administrator of St. Paul’s. In that case, I would deduce that the charity in question would be St. Paul’s; however, that information was not specifically stated in the E-bay ad.

All of this seems rather ironic, since the Diocese actively worked for the passage of Prop 8, which stripped same sex couples of marriage equality in California. The fact that they would now refer to the desk as the “historic Prop 8 desk of Father Geoff Farrow” seems disingenuous. I do not want someone to purchase these items under the mistaken belief that their funds will contribute to the ongoing struggle for full marriage equality.

I would suggest that anyone seriously interested in purchasing this desk/chair contact Deacon John Supino at St. Paul’s Newman Center in Fresno, CA. and ask him what the “charity” is which will benefit from the sale of these items.