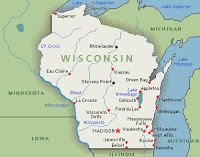 Anti-gay group Wisconsin Family Action has filed a challenge to the state’s new domestic partners law, claiming it is in violation of the ban on same-sex marriage.

“Elected officials should never pass laws that violate the will of Wisconsin voters who legitimately amended the state constitution in a fair election,” Julaine Appling, president of Wisconsin Family Action and lead petitioner in the lawsuit, said in a statement. “This new domestic partnership scheme is a sneaky assault on marriage from those who are determined to redefine marriage in Wisconsin.” Doyle spokesman Lee Sensenbrenner said the domestic partnerships were about providing legal protections to same-sex couples, not marriage. “This is simply a set of basic protections to ensure that people can get some simple, straightforward rules that help them,” Sensenbrenner said. “No one ever set this up to be marriage.” Wisconsin will become the first state with a constitutional amendment banning same-sex marriage and civil unions to put in place domestic partnerships for same-sex couples. It is also the first Midwestern state to legislatively extend legal protections to same-sex couples.

Same-sex couples will be able to register as domestic partners in Wisconsin beginning August 1st. Wisconsin Family Action has filed their challenge directly to the Supreme Court, hoping for rapid action, something they are unlikely to see as the Supreme Court typically does not hear cases that have not worked their way through lower courts. Follow the case on the blog of the LGBT rights group, Fair Wisconsin.