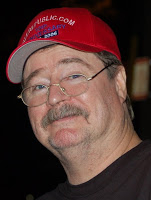 Jim Robinson, the founder of Free Republic, the most widely-read conservative internet forum, has issued a call for the overthrow of the U.S. government.

An interim provisional Chief Executive and congressional representatives will be established as follows: The Secretary of State shall immediately assume the office of interim Chief Executive. The Chief Executive shall appoint and the interim Senate shall confirm an interim Vice President. An immediate election shall be held within each state legislature to appoint two interim senators to represent each sovereign state. A special election shall be held by all states within 30 days to elect interim members of the House of Representatives. Elections for regular government offices shall be conducted in November, 2010 as previously scheduled, except that elections will be held for all elective offices, including President, Vice President and all U.S. Representatives. U.S. Senators will be elected per class schedule by the various state legislatures.

Robinson’s lengthy call to arms goes on to plan for the repeal of the 16th and 17th amendments, the abolishment of the IRS, the dissolution of social security, and the return of federal buildings, properties, and military bases to “their sovereign owners,” the states in the which they are located.

UPDATE: Free Republic has created a new post linking this one. Be prepared for an onslaught of Freeper trolls in the comments. Note to Freepers – unlike on Free Republic, opinions contrary to mine and the majority of my readers will be allowed to remain. Anti-gay and racist language will not.