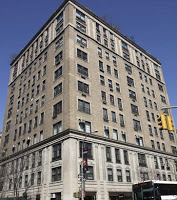 U.S. Marshal Joseph Guccione said the marshals arrived at the property at noon with a court order permitting them to take custody of the apartment and cause anyone there to move out. Guccione said Madoff’s wife Ruth had been advised in advance of the marshals’ plans and was leaving the residence, surrendering all personal property. “She will be leaving,” he said. “Restitution for the victims is the government’s top priority.” Typically, the marshals service changes all locks and secures a property when it seizes a location. Last week, Ruth Madoff agreed to give up all of her possessions in return for a promise that federal prosecutors would not go after $2.5 million she can keep. The money, though, is not protected from civil legal actions that might be pursued by a court-appointed trustee liquidating Madoff’s assets or by investor lawsuits.

It’s quite a media circus over on E.64th, I think people are hoping to see Ruth sitting on the curb. What will the poor dear do, with only $2.5M to her name?