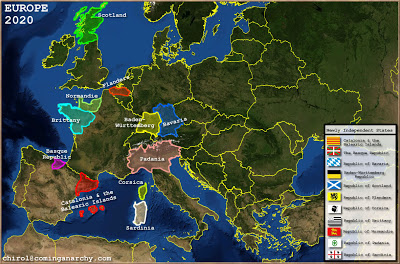 An interesting entry at Coming Anarchy speculates about the various autonomy movements around Europe and what may happen should some of them achieve independence.

Even if only a few of these microstates were to be born, it could have serious consequences regionally, transatlantically and globally. In Europe, it would suddenly create a host of rich and poor states, which their previous host states balanced out. Northern Germany will get poorer and the two southern states stay very rich for example. Over time, the lack of wealth transfer from southern to northern Germany, or from northern to southern Italy will likely create less developed and poorer states within Europe no longer able to stay afloat. As an Italian friend once joked, without the north, southern Italy would turn into a Catholic Pakistan. As reader DJ noted, now more than ever, regions of today’s states are trying to maximize the economic benefits of globalization while minimizing the social costs, leading to richer regions breaking from poorer ones.

Previous Michael Steele: The GOP Is Not Dead
Next How To Never Be Wrong About Gays